The Nag's Head is the local boozer for the Trotter family and the pub that has featured in the serial itself and the spin-off Green Green Grass and prequel Rock And Chips. When the serial began in 1981 the governor was unseen and was never identified but Mike Fisher took over in 1983, and was a regular character, and Sid from the cafe took over in 2001 when Mike was sent to prison for getting involved in the Trotters dodgy money making schemes. Derek "Del Boy" Trotter and Rodney Trotter are 2 regular customers. The pub has a reputation for serving watered down beer, as Trigger, a local customer is quick to point out.

The pub is somehwere near the Nyrere Estate in Peckham in South London. Trigger's flat is inbetween Del's flat on the Nyrere Estate, and the Nags Head. You even have to walk past the pub from Del's place to get to Trigger's place.

The Nags Head was run by a governor who was never seen in the series and whose name was never revealed. In 1983, Mike Fisher took over as landlord. The main pub originally had 2 entrance and exit doors either side of the main optics and bar area. By 1988, as first seen in Dates, the doorway to the right of the main bar had gone and been replaced with a wall and additional seating area.

In 1996, Mike's bothersome regular customer Del became rich and left the area to move to the countryside. Del often tried to con Mike into buying the junk he sold. Now that Del had left Peckham, Mike could finally get some peace and quiet.

Mike kept in touch with Del and invested his savings into Del's dodgy South American stock market which would eventually crash. In 2001, when The Nags Head landlord Mike Fisher was sent to prison for fraud, he asked Sid to run the pub for him until he's released. Sid took over as the pub landlord and adopted a much tidier and cleaner image than he ever did when he ran the cafe. At 76 years old he still was quite fit and able enough to run a pub full time.

In 2005, The Nag's Head was still going and Sid was still running it.

From 1981 to 1987, the pub had 2 sets of double doors, either side of the main bar area. Across from the left hand double doors was a door leading to the ladies toilets. From 1988 onwards the double doors on the right hand side of the bar were replaced with a wall and seating area. Also the toilet doors disappeared. The toilets probably were relocated outside the main pub/bar area.

The distance between Del's flat at Nelson Mandela House and The Nag's Head is unclear, however it is about a 10 minute walk. Trigger lives near The Nags Head. Trigger's flat is closer to the pub than Del's flat. To walk from Trigger's place to Del's place you have to walk past The Nags Head.

The Nags Head interior did not appear in the following episodes 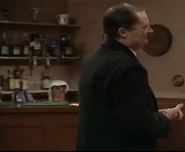 The mini bar area of the upstairs function room

The landing inbetween the function room and the stairs. 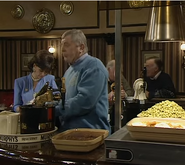 The bar area in 1996. Mike tries to sell Boycie some food. Marlene suggests the harvester.
Community content is available under CC-BY-SA unless otherwise noted.
Advertisement