Nelson Mandela House is the fictional tower block on the fictional Nyrere Estate in the real life London district of Peckham, SE15. The Trotters flat is on the 12th floor and has housed members of the Trotter family since the tower blocks were built in 1960, save for 5 years from late 1996 to mid 2001 when the Trotters were millionaires before losing their money in true plonker style when their dodgy stock market crashed and they lost all their investments.

The tower block opened in September 1960 and was originally called Sir Walter Raleigh House. As Joan Mavis Trotter was pregnant, she was entitled to apply for one of the flats. They were given a 12th floor flat with good views over London - more tower blocks.

Joan died in March 1964 after alcohol abuse and their flat was not as well looked after. Reg also left the family in 1964, leaving a 18 year old Del and 3 year old Rodney with their Grandad.

By 1981, the Trotters had lived at Nelson Mandela House for 20 years. As tower blocks are not really built to last, the exterior facade of the 20 year old tower block was a bit dirty and worn by then. Grandad was about 75 in 1981, Del was 36 and Rodney 20. Their 12th floor flat was often full of nik naks and hookie gear, from tyres to Turkish raincoats and bootleg booze. By 1989, when Del moved Raquel Turner in, he smartened the flat up. The wall in-between the balcony and the hallway to the bedrooms, magically expanded by about 2 feet circa 1989. The walls in the tower block are quite thin, as commented in 1985 when Del said "These walls, they are paper thin". In 1993, Albert was woken up by a drunk Del singing, 12 floors below on the estate.

In late 1996, Raquel's parents came to he flat to have a dinner. Antiques dealer James Turner saw a timepiece on the gas stove and was interested. He said it was a lesser watch, and could be the last Harrison watch that people have been searching for the past 300 years. If so then it could be worth a lot as Harrison was the best watchmaker ever. Del proved it was his as he has a receipt. It earned him £6.2 million for it.

Some time after becoming a millionaire and moved out with Raquel and Damien, Del returned to their now empty flat in Nelson Mandela House, and recalled the memories from the flat over the years, including quotes from his parents, and Grandad. Rodney also returned, and Del reveals that he is already beginning to miss the old life as a market trader. Albert returns to the flat to get some of his belongings as well to have one last look, and the three leave, though not before Del answers a call from Lenny Morris offering them 250 carpet steamers. Del is initially keen, but a serious Rodney tells his older brother that they aren't in the business any more. Del reluctantly tells Lenny that "Trotters Independent Traders has ceased trading."

After the Trotters became rich and left London, their flat stayed empty for 5 years. Del let the estate agent have the carpet but never put the flat on the market.

Known residents over the years

One of the flats on the 11th floor

One of the flats below the 12th floor

In-between 1985 and 1988, Nelson Mandela House and its neighbouring tower blocks probably had an external reclad, the original concrete exteriors were covered over with bricks. In real life, location filming switched from Acton in London to Bristol, so a new tower block estate was used for filming which was significantly different to the Harlech Tower estate in Acton. Nothing was given onscreen for the change in look of the tower blocks the Trotters lived at but a reclad is the best explanation.

Joan Trotter applies for a flat in early 1960.

Joan with baby Rodney on the balcony in 1960. 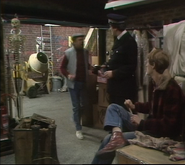 The Trotters garage in 1985. That Harrison watch is in there somewhere.
Community content is available under CC-BY-SA unless otherwise noted.
Advertisement